Jacob Sapochnick is an immigration attorney in San Diego — and the most popular lawyer on Facebook as far as we can tell.

How did he do this?

He has a mix of organic and paid marketing.

His top one is fan acquisition:

This ad targets cities near his office in San Diego. Notice that it’s targeting 14.8 million people– not micro-targeted nor using connection targeting.

But, recently, we’ve found that giant audiences are actually working, since Facebook is now smart enough to figure out which subsets are going to convert. He’s using optimized CPM bidding, where Facebook does the bidding for you.

Of course, it depends on how likely these fans turn into consultations. Notice that 61 of the 89 actions resulted in fans.

Clearly, this is Facebook’s new ‘buying by business objective’ working.

Here’s his #2 ad, which is also fan acquisition, but is using a sponsored story– a page like story.

Notice that the cost per fan is only 88 cents here — half of the regular page like ad. The sponsored story is the “voice of the customer” (Alex likes X), while the regular ad is the voice of the business.

197 of the 286 clicks turned into fans for the sponsored story, while only 61 out of 116 clicks in the regular ad converted to fans.

And he’s breaking all the rules of Facebook ads

He’s targeting 20 million people (the number of friends his 100k fan base has). And he’s generated engagement at 3 cents each– spectacular.

However, notice that he’s targeting countries such as India, Mexico, Turkey, and the Philippines. The cost of traffic is much lower there. But since he’s an immigration attorney, this makes sense.

That means he’s getting video views at 5.2 cents, which is likely going to be a lot less than YouTube’s TrueView platform.

So think of this as a sneaky way to get cheap YouTube views. If only G+ would allow for friend-of-fan or other social connection targeting.

By the way, you can tell when someone is boosting a post when the automatic ad name is “promoting

Notice that he’s getting only 1% newsfeed coverage, which is actually not bad for a big page that is B2B.

We can talk about the 16% number that other people throw around another time. Or just read this research from AgoraPulse, which shows only a moderate decline, if at all, in reach last quarter.

By keeping an “always on” strategy, we’re nurturing fans with many, lightweight touches over time.  This is the workhorse of your Facebook ad strategy.

Looking at his most recent posts, we see that the story of Steven Seagal hating immigrants and running for Governor of Arizona got the most interactions.

Note that he’s not promoting his immigration services, but staying relevant in current events.

Had he built his always-on ad earlier, it would have automatically picked it up while it was hot. but it’s still not too late to select that post and give it a nudge (or even a boost, perhaps).

Notice that the post had a reach of 2,334, which is double what his posts normally get. 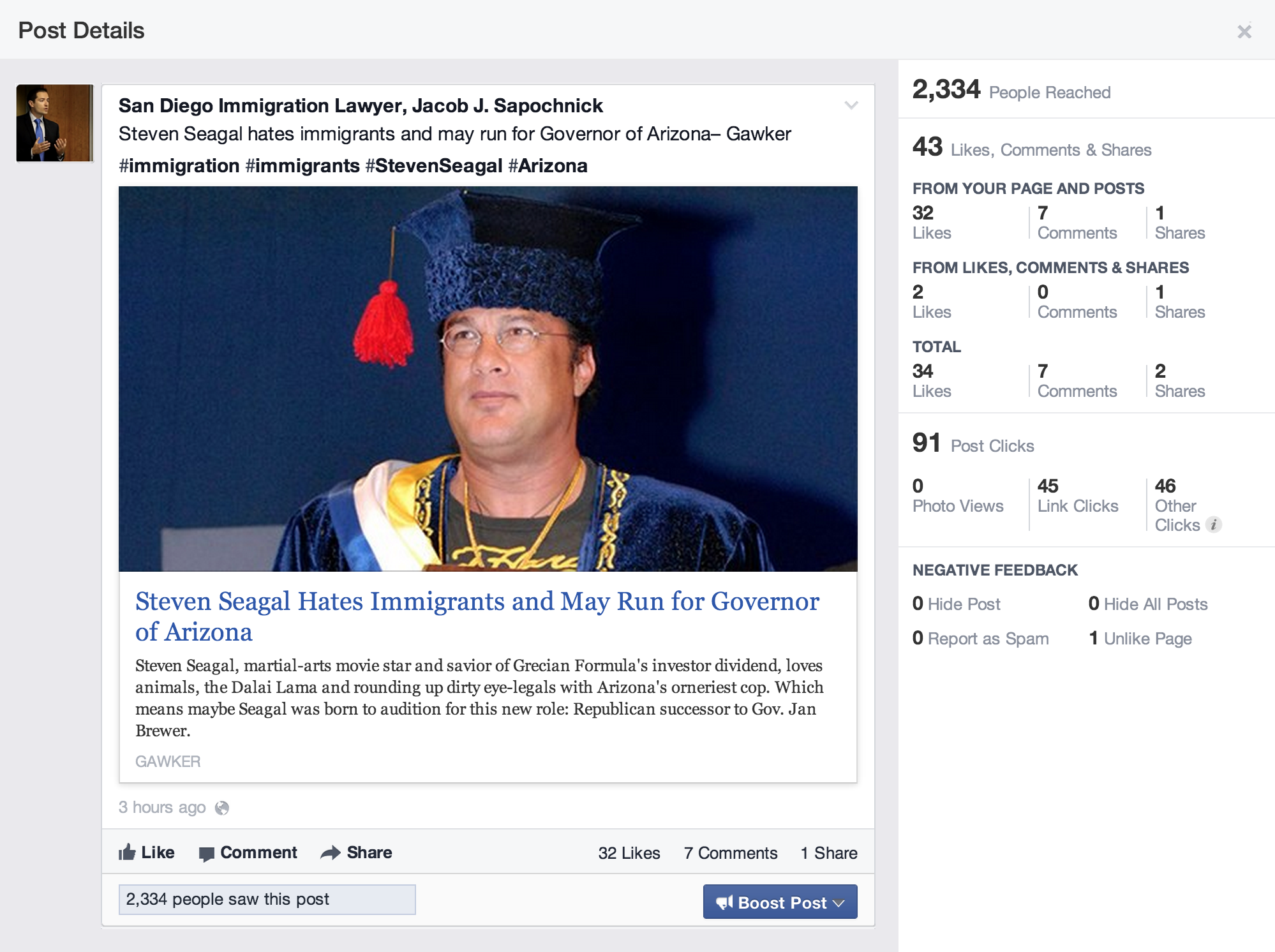 When you get a lot of interactions, it bumps the story back up into the newsfeed, so you get more repeat views. So the impressions are well over 3,000, but the unique number of viewers (also called “unique impressions”) is only 2,334.

Look at the ratio of your impressions to reach (unique impressions) to get a sense of how viral/effective your content is.  We typically see a ratio of 1.4, but it can be as high as even 3-4.

Paid impressions (ads) will usually reduce your ratio of impressions/reach because ad frequency is typically lower– close to 1 for newsfeed placements.

Getting this kind of performance so easily is going to make it hard work for Facebook ad agencies to prove they can generate incremental value.

The Audience As THE Asset, Is Your Company Missing Out?