Tumblr users publish 94.1 million posts per day. And at least 70 percent of Tumblr’s users spend their time in the dashboard, or the backend where actual content creation takes place.

Until now, publishers could not share a poll to Tumblr and have it work interactively on Tumblr blogs or in the Tumblr Dashboard. 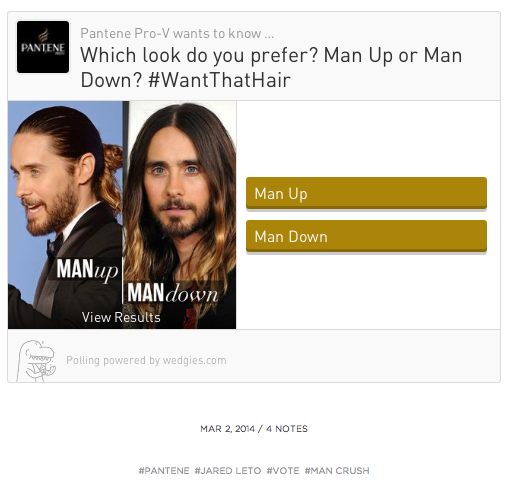 Wedgies integration with Tumblr allows content producers to do away with HTML code workarounds to create a poll.

To share a poll on a Tumblr, simply create a Wedgie URL on Wedgies.com and paste it into a video post, or use the Tumblr share buttons on Wedgies.com. Once live, whether in the dashboard or blog network, users have the ability to vote on a poll.

Wedgies polls are highly engaging and interactive as you can see in the example below. Polls supports animated GIFs, and the company provides unlimited, free polls and offers premium features like customized branding and audience analytics.

While these polls are fun (and free) for anyone using Tumblr.com, for brands it reintroduces polling as a new valuable option for content creation on these platforms. Upon launch of the integration, brands like Budweiser, Drafthouse and Pantene are using Wedgies polls.

“We know from experience that polls absolutely increase engagement and make it easy for people to share an opinion without having to create additional content. On average, Wedgies polls give brands 10 times more engagement,” according to Jimmy Jacobson, co­founder of Wedgies.

What’s even more interesting are opportunities possible when you consider the growth of Tumblr as a native ad platform for Yahoo.

Last month, Yahoo’s Head of the Americas Ned Brody described the ability to tell better stories around content experiences instead of just focusing on highly programmatic ones.

Properties like Yahoo Tech and Yahoo Food have been build on the Tumblr platform and already are publishing sponsored stories from content partners, this opens up the possibility for brands to create quality interactive content on their own Tumblr channels and then pay to amplify it through Yahoo’s ad distribution network.