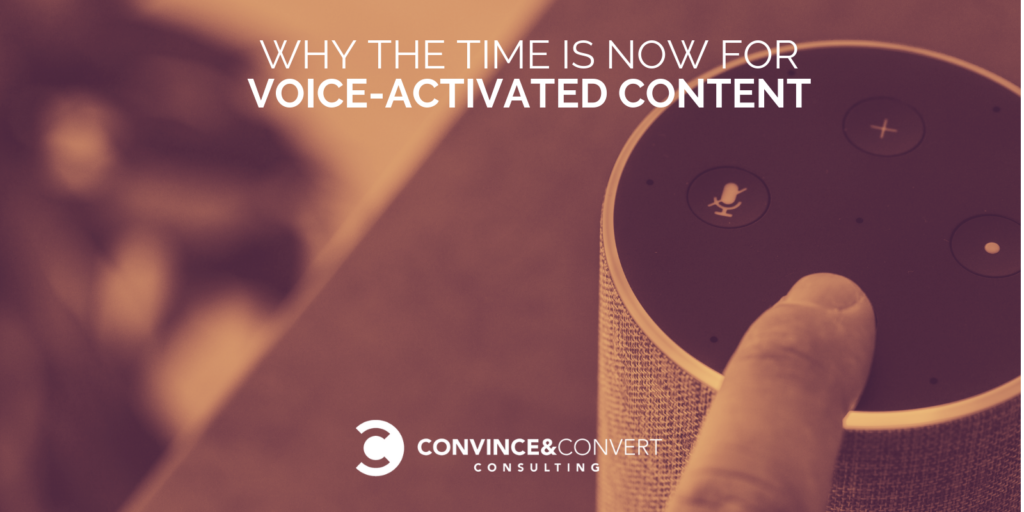 According to new data from Edison Research, more than 53 million Americans now own a smart speaker (Amazon Echo, Google Home, et al). That is an increase of 14 million people in one year (36%), making smart speakers and voice assistants one of the fastest-adopted consumer technologies in history.

For frame of reference, approximately 31 million Americans currently read a newspaper each weekday. And while newspaper readership has been on the decline for quite some time, even at its absolute apex circa 1973, 63 million Americans read a paper daily.

There’s a lot of talk about the rise of voice search and voice-enabled content, but if anything there’s not enough talk, given the size of audience and present/future capabilities of these technologies.

Can You Hear Me Now?

Which is why I’m so excited to announce that Convince & Convert is now an official agency partner of Voicify, the world’s first Voice Experience Platform.

Voicify allows our strategy team to conceptualize and craft winning voice-activated content for Amazon and Google devices with minimized hassles and expense. We are already building out multiple proofs of concept for clients and will be showcasing more voice content case studies and examples here at the Convince & Convert site.

Here are some other statistics to explain why we are going hard into voice content development for our clients:

In the past year, smart speaker users who own two or more devices moved from 38% to 52%

In the past year, smart speaker users who own two or more devices moved from 38% to 52% Click To Tweet

In addition to freestanding smart speakers, Amazon and Google are hard at work embedding voice content technology into a huge array of other devices, including vehicles, Bose speakers, Sonos speakers, clock radios, the Chrome browser, and many, many more. We will be surrounded by voice interfaces, and SOON.

A recent survey of business decision makers by Adobe found that 91% are preparing to make significant investments in voice, and 44% plan to release a voice app in 2019.

Adobe suggests that much of voice app development will enable commerce. Not a surprise, given their huge foothold in e-commerce and related fields. And today, their research shows that most voice programs are being funded by the mobile app or Internet of Things departments in major brands.

But here at Convince & Convert, we believe voice can just as easily be a major part of a different corner of the enterprise: content marketing.

There are two elements with which every brand and business must contend in terms of the convergence of content and voice.

1. Why Voice Needs to Be Part of Your Content Marketing Program: Consumer Engagement

Presenting compelling and Youtility-oriented voice-activated content to consumers opens an all-new avenue for engagement. It’s an opportunity that eschews the expensive and often clunky website, as well as the social media playgrounds that increasingly require ad budgets to reach customers. 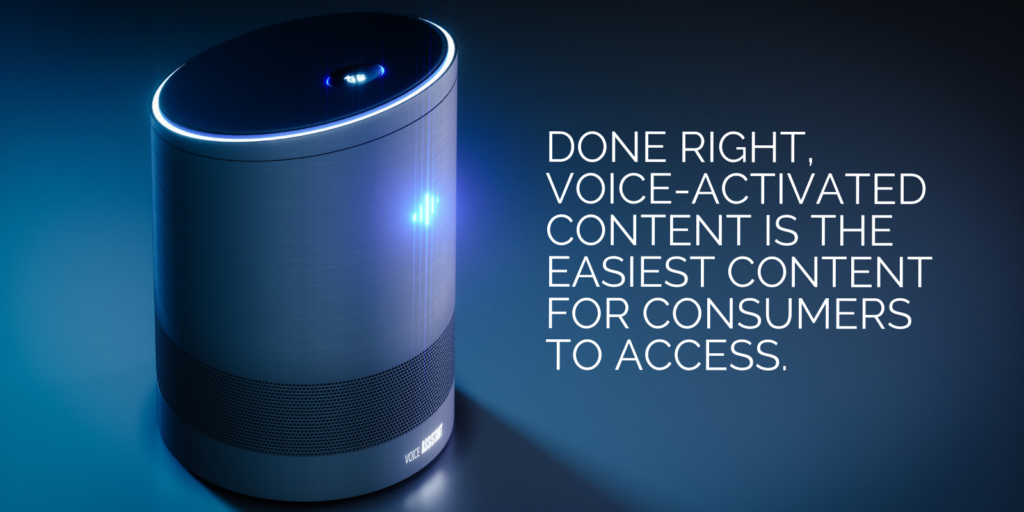 In conjunction with Voicify, we aim to help our clients create truly useful, helpful, interesting content in these platforms. And as the technology (and process of Skills/Action discovery) improves, I believe a voice-activated content strategy and corresponding program will become non-optional for B2C and B2B brands.

2. Why Voice Needs to Be Part of Your Content Marketing Program: Voice Search and the Land Rush

The second reason voice is a big part of where we’re headed is the growing importance of voice-driven search engine optimization. With half of all searches being voice searches by next year, what Google/Alexa/Siri/Cortana recommend to the searcher will be a huge driver of business.

Today, when you do a Google search, you get approximately 10 options on the first page, plus some multi-media options, and maybe some reviews as well. It of course is best to be first on a search engine results page, but if you’re on page one somewhere you’re in pretty good shape. But with voice search there is ONE and ONLY ONE winner. Alexa isn’t going to give you 10 options. You get one. In the world of voice search you win, or you’re invisible.

How do you win? Voice-activated content on Amazon and Google devices is served up using an “invocation phrase.” It works like this: “Alexa, give me some digital marketing tips.” Alexa’s first stop in assisting the human is to look to their own Alexa Skills Store (this is true for Google Assistant, Cortana and will be true for Samsung Bixby as well).  When it finds a skill that can supply an answer it recommends the skill to its user. “Jay, it looks like Convince & Convert can answer your question, do you want to enable the skill?”

Amazon allows for multiple invocation phrases. Thus, more than one brand could have “digital marketing tips.” If that were the case and no owner was specified in the query, Amazon will choose the app based on information matches in the “CanFulfillIntent” data stored in the app (which is metadata and invisible to the user), consumer reviews, and usage levels. Thus, app quality has a material impact on exposure (just like with most content and SEO).

Like typing an address into a URL bar for websites, there is a direct invocation model as well. For instance, if you say: “Alexa, ask Oracle for a digital marketing tip,” then Oracle’s voice app will launch. This is an incredibly important concept for brands to understand as they will be in charge of awareness in this channel, and how they are “invoked” using what phrases.

Makes sense, right? But here’s the really important part: Google doesn’t allow multiple invocation phrases. Thus, Google, which sees voice content and voice search as so important as to be nearly existential to their future in a post “webpage” world, is creating a voice content gold rush. Not dissimilar from domain name squatting, there can be only one “digital marketing tips” on Google, and the clock is ticking.

What Kind of Content Should You Create for Voice?

Just like early websites and early mobile apps, the use cases for voice-activated content are constantly evolving and being discovered. But today, consumers are primarily using smart speakers for questions and answers, music, weather, etc.

Thus, for 2019, most of the voice-activated content we’ll create for clients will be rooted in information, helpfulness, and Youtility. As consumers get more comfortable with using smart speakers for more complex, API-driven interactions, we’ll add layers of specificity and nuance to what we’re doing with voice-activated content.

And while voice-activated buying is at the bottom of the list in terms of smart speaker functions, research from Voicebot and Voicify suggest that 26% of smart speaker owners have made at least one purchase on these devices. Using the Edison Research number of 53 million American owners, you’d get a pool of nearly 14 million Americans that have bought something via smart speaker already. Not massive, but certainly not insignificant. 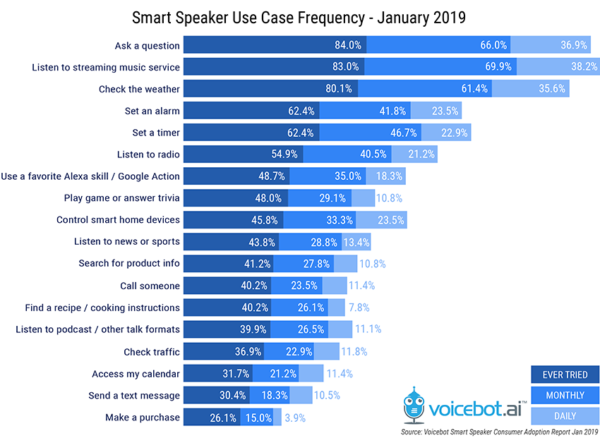 Google’s own research shows that consumers are quite enthusiastic about receiving content from brands via these devices, especially when that content is viewed as useful in one or more ways. They found that 52% of smart speaker owners want information about deals, sales, and promotions. 48% want personalized information and tips. And 42% would like information about upcoming events, or activities.

One of the developments that will help dictate use cases for voice-activated content is the growing prevalence of screens on smart speaker devices. The first and second-generation appliances were audio-only. Consequently, a large share of smart speakers in homes and offices today lack a visual interface. However, the new Google Home Hub and Amazon’s Echo Show 5 are full-featured, with lovely video displays, solid speakers, and touch screens, priced at under $100.

Thus, we expect the next wave of smart speakers bought by consumers to be primarily multi-modal (audio + visuals + video), opening up many more opportunities for engaging content marketing, and interactive experiences including commerce.

The Choice of Voice

Voice is next, and it’s now. It’s not going to replace anything. I hate pronouncements that X is going to “kill” Y. Because it never does. 31 million people — including me — still read a newspaper every day. So voice isn’t going to make your website unnecessary, or put Facebook out of business.

But the numbers don’t lie. Voice is easy to use, and it’s effective. And B2B and B2C consumers LOVE it. The train is accelerating. It’s time to jump on. We’re here to help, if you’d like.