As part of the promotion, the fast-food chain plans to offer members who sign up for the program in the app with free fries.  McDonald’s is also hosting a “World Famous Fan” contest that will award 66 fans (one for each year of McDonald’s history) with 1 million rewards points, and one fan with free fries for life. (That’s a lot of carbs.) 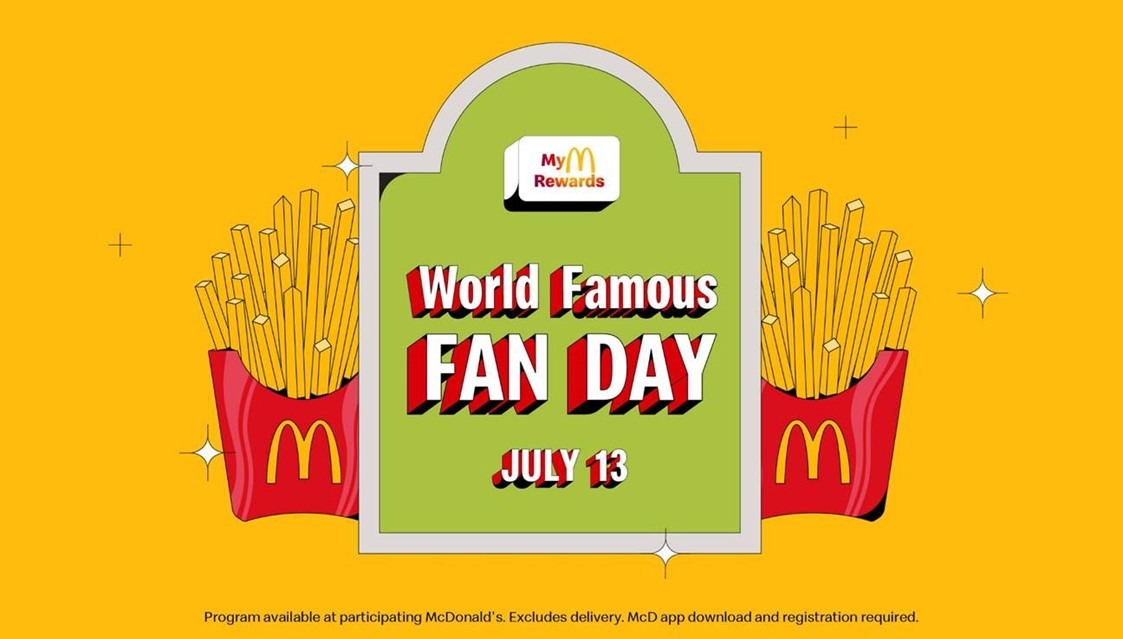 “We have the best fans in the world who deserve to unlock perks for their loyalty,” Alycia Mason, vice president of digital customer experience & media, McDonald’s USA, said in a press release. “That is why we are so excited to bring MyMcDonald’s Rewards nationwide and celebrate with all of our guests on World Famous Fan Day. We’re eager to repay years of fandom by giving them what they love most about McDonald’s—our delicious food—for years to come.”

The Golden Arches’ new membership program highlights the increasingly essential role that subscription and membership offerings can play in providing a direct line of communication between your organization and its stakeholders, while also creating a relationship that allows for the above board collection of user data and insights (provided you’ve asked for their consent first).

Billionaire businessman Richard Branson has completed his first trip to space aboard the Virgin Galactic space plane, marking the first time his commercial space company has flown to space with a full crew. Leading up to the launch, Branson shared a video chronicling his long journey to visit space on Twitter teasing the space launch:

From dream to reality, this is the story of @VirginGalactic. The next chapter begins tomorrow. Watch the #Unity22 launch live at 6 am PT | 9 am ET | 2 pm BST on https://t.co/PcvGTmA661 pic.twitter.com/ETa6KXRW5F

Have you had dreams about this flight, @SirishaBandla? #unity22 pic.twitter.com/PIIknabetx

After fellow spaced-out billionaire Elon Musk tweeted his support for Branson, the two got together on the morning of the launch in a show of solidarity:

Thanks for being so typically supportive and such a good friend, Elon. Great to be opening up space for all – safe travels and see you at Spaceport America! #Unity22 @virgingalactic https://t.co/fLCoeJOPJJ

🎉🚀Spectacular, indeed. Congratulations to the @VirginGalactic team on the successful launch of #Unity22 — your first fully-crewed test flight to space! Onward and upward: https://t.co/Xwdf3OuHu1

Virgin Galactic shared Branson’s messages to the public soon after the launch ended:

I was once a child with a dream looking up to the stars. Now I'm an adult in a spaceship looking down to our beautiful Earth. To the next generation of dreamers: if we can do this, just imagine what you can do https://t.co/Wyzj0nOBgX #Unity22 @virgingalactic pic.twitter.com/03EJmKiH8V

I have dreamt about this moment since I was a child, but going to space was more magical than I ever imagined https://t.co/Wyzj0nOBgX #Unity22 @virgingalactic pic.twitter.com/grs7vHAzca

Most Twitter users were skeptical about the magic Branson described, instead highlighting the excessive nature of a commercial space flight helmed by a billionaire when so many people on Earth still struggle to make ends meet and highlighting Branson’s failed sustainability commitments:

You know what is magical? having a place to live, having a roof over your head. help the people here on earth.

Richard Branson is proof that when billionaires realize saving the planet is like hard or whatever, their next best idea is to leave the planet behind entirely. As long as it's still about them. A story in three parts. pic.twitter.com/Cf4qql02V9

A rich guy flew in a rocket plane. Let’s move on.

Virgin Galactic’s social media game documents many best practices for social engagement, including repurposing content across multiple channels, linking out to larger resources and landing pages using a short link, engaging competitors in your space as partners on social media and more. Unfortunately much of the messaging, including a tweet from Branson about a contest to win seats on future flights that claims “space is for all humanity,” ignores general audiences’ increasing concerns about sustainability and income inequality while resurfacing some of Branson’s past reputational issues.

A study by Muck Rack found that 61% of PR pros at brands and nonprofits consider securing earned media coverage as the top way to increase value at their organization, followed by tying PR work to key business initiatives (57%) and producing measurable results (50%). 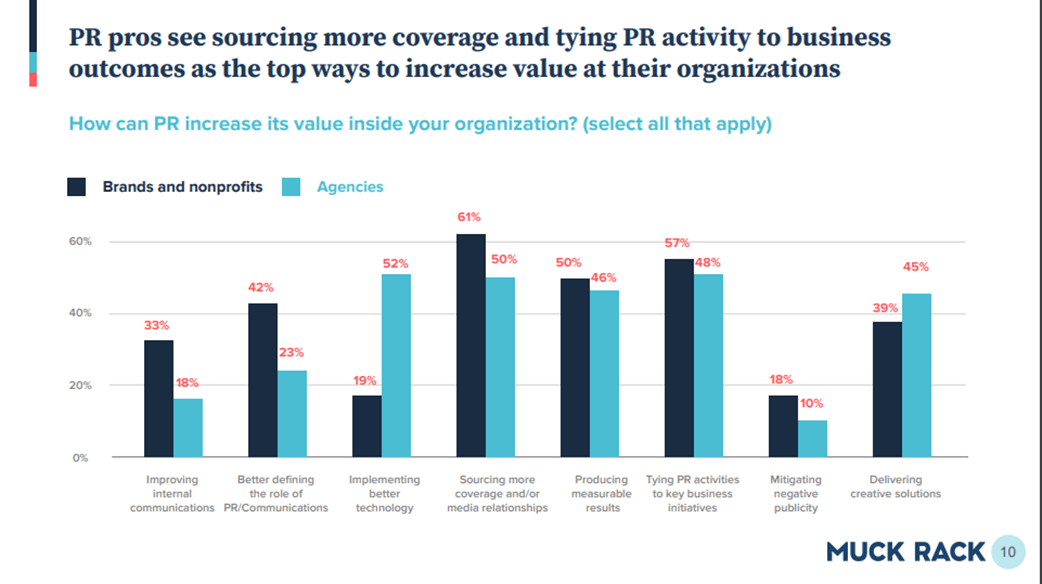 These numbers not only show that most PR pros consider measurement a crucial way to improve PR’s value at your organization, but also show that the link between measuring coverage and connecting those results to larger KPIs is considered a slightly larger priority to brands and nonprofits than it is to agencies.

President Biden has signed an executive order designed to promote competition in the American economy by targeting big tech companies that have been the target of several antitrust lawsuits this year. The order also takes aim at restoring several net neutrality initiatives that were rolled back since the Obama era. Net neutrality, the idea that all internet service providers (ISPs) should not discriminate against some users over others by doing things like throttling data speeds or discriminate by providing reduced service to certain users, certain websites or certain types of content.

According to the executive order, new requirements of ISPs include:

(v) initiating a rulemaking that requires broadband service providers to display a broadband consumer label, such as that as described in the Public Notice of the Commission issued on April 4, 2016 (DA 16–357), so as to give consumers clear, concise, and accurate information regarding provider prices and fees, performance, and network practices;

(vi) initiating a rulemaking to require broadband service providers to regularly report broadband price and subscription rates to the Federal Communications Commission for the purpose of disseminating that information to the public in a useful manner, to improve price transparency and market functioning; and

(vii) initiating a rulemaking to prevent landlords and cable and Internet service providers from inhibiting tenants’ choices among providers. 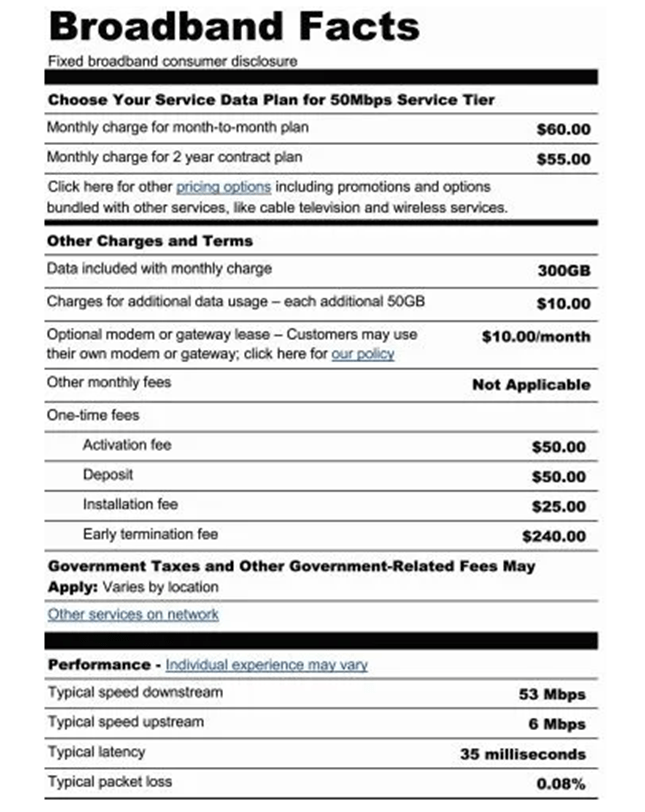 While much of the order’s directions for ISPs focus on creating frameworks for stronger customer communication and providing options for better service, Biden’s reintroduction of the above ‘broadband nutrition label’ that was first introduced in 2016 highlights the tremendous opportunity for technology companies to embrace mediums and methods for external communications that PR pros in other industries have a better handle on, infographics included.

Multiple journalists at The New York Times have shared their thoughts about how appearing on broadcast television as sources to speak about their reporting can build a stronger relationship with audiences:

“Sources in Washington watch, and maybe someone starts to recognize you more and is more likely to return your call on your next story,” [said NYT White House correspondent Annie Karni].

“You want to come up with one or two things you want the audience to know and really emphasize those,” she said. “Even if it’s not the exact answer to the question you’re asked, it’s better than trying to think on your feet.”

These journalists offer tremendous media training insights to communicators around how you can prep your executives for on-air thought leadership appearances while making a case for the relationship-building power of TV interviews.

Pfizer’s CEO apologizes to Fauci for lack of communication

Dr. Anthony Fauci revealed that Pfizer CEO Albert Bourla has apologized to him for not providing advance notice that Pfizer was seeking authorization for a booster COVID-19 vaccine from federal health authorities. Bourla suggested that a third dose may be necessary for those with low immune systems during a panel conversation in early April.

“We are on the same page,” Fauci told CNN’s Wolf Blitzer. “They came out with the announcement without giv[ing] us a heads up. Quite frankly, the CEO, who is a really good guy, got on the phone with me last night and apologized … for not letting us know that he was going to do it ahead of time.”

Fauci also reiterated that booster shots are not needed at this time:

Dr. Anthony Fauci says fully vaccinated Americans do not need to get booster shots right now.
“The FDA, CDC and NIH are now gathering information through clinical studies and laboratory studies to determine if and when we might need boosters. But that's not right now.” pic.twitter.com/3NM7E2vNKV

Pfizer said it has its own data showing that immunity against the coronavirus declines in vaccinated people over time, particularly in the elderly, but some scientists and health officials have cautioned that only the company has seen that data so far. The company will share the data with the FDA. The meeting is scheduled for Monday, though that could change.

Pfizer’s vaccine messaging offers another example of how important it is to include partners on messaging changes when the stakes are high. By revealing Bourla’s apology, Fauci emphasizes the chain of custody for releasing external vaccine communications and restores confidence that Pfizer and the government are working in tandem.

When launching a new campaign with a partner, remember to designate who will offer quotes and statements around each component of the partnership as it evolves. You can ensure that this plan is communicated up to leadership by drawing a clear delineation around what talking points they are or are not clear to speak on.

Does your leadership consult the comms team for media training ahead of interviews?

Does your leadership consult the comms team for media training ahead of interviews? #DailyScoop

Let us know your tactics for making sure your execs are camera (or microphone) ready below using the hashtag #DailyScoop!