Last year I wrote a Year in Review article that mainly focused on Facebook: 20 Changes Facebook Made In 2012 That Impacted Marketers. I mentioned that “Facebook was all about refinement in 2012.” If “refinement” was the word of 2012, “streamlined” was the word of 2013.

And this year I want to focus on the broader options that social marketers have at their disposable now.

An influx of new top tier social networks spread user attention thin in 2012 and required a renewed emphasis on key features and functionality.

It was still the 800-pound gorilla in 2013, but a variety of other networks took their shots at prominence and deserve our attention as well.

Here are the top social media changes and trends introduced in 2013 and the last 12 months.

The Growth of Short Video

Twitter started the year off with the launch of Vine, a mobile service that lets you capture and share short looping videos. Twitter noted on its blog that, “the brevity of videos on Vine (6 seconds or less) inspired creativity. Now that you can easily capture motion and sound.”

Vine saw 403% growth between the first and third quarters of 2013, making it the fastest-growing app of the year. And then Instagram launched video…

Instagram added fifteen second video functionality on June 20. The number of Vine video links shared to Twitter dropped nearly 40 percent that day. Vine sharing on Twitter continued to drop over the following week, resulting in a roughly 70 percent drop from the nearly three million links shared on June 15. Instagram jumped on the video hype by announcing sponsored ads on October 3.

Facebook learned from the success of Instagram’s video ad integration by rolling out auto-play video ads on December 17, 2013. According to Facebook, the social network began testing auto-play video ads in September and the changes resulted in a more than 10 percent increase in video views, likes, shares and comments. 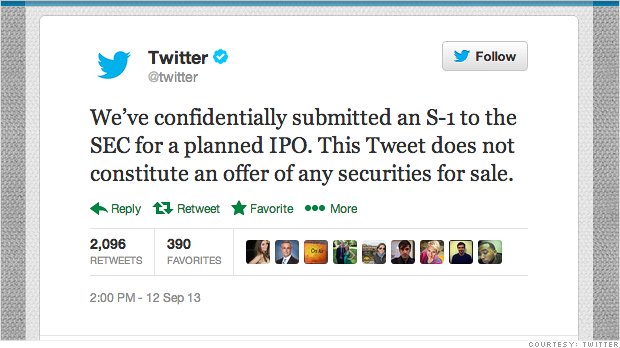 On May 22, Twitter introduced Lead Generation Cards to help B2B brands drive highly qualified leads. According to Twitter, “These cards makes it easy for users to express interest in what your brand offers. Users can easily and securely share their email address with a business without leaving Twitter or having to fill out a cumbersome form. When someone expands your Tweet, they see a description of the offer and a call to action. Their name, @username, and email address are already pre-filled within the Card. The user simply clicks a button to send this information directly (and securely) to you.”

Twitter also integrated previews of photos and Vine videos directly into users’ streams on October 29. Users see more of the photo or play the video by tapping the preview.

As a result of Twitter’s focus on advertising, the platform saw a 22 percent increase in small business usage. 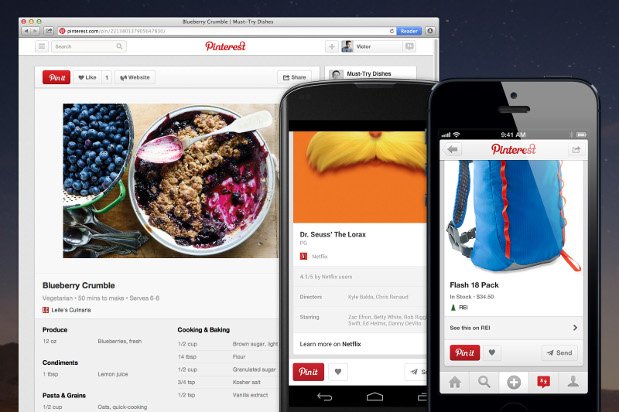 Pinterest introduced Rich Pins on May 20. Instead of linking back to the pin’s origin, each new Rich Pin provides users additional information about that item aimed to better put them in a position to make a purchase. There are three different types of Rich Pins, each with its own unique set of characteristics and opportunities for brands: Product, Recipes, and Movies.

On September 19, Pinterest announced it would roll out Promoted Pins as its first advertising product with select partners. Promoted Pins allow businesses to insert pins into search results and category feeds similar to sponsored advertising options offered by social networks like Facebook and Twitter. Promoted Pins started to appear in users’ feeds in early October.

LinkedIn expanded its business offerings through the launch of Showcase Pages on November 18. Showcase Pages are dedicated content hubs enabling businesses to extend their Company Page presence, effectively segmenting audiences and enabling businesses to deliver the best message to the right audiences. Somewhat similar to LinkedIn’s existing company pages, Showcase Pages are designed to give individual brands and business units within corporations the ability to create their own segmented marketing channels on LinkedIn.

In order to amplify the reach of its marketers’ messaging, LinkedIn continued 2013’s sponsored advertising trend by rolling out Sponsored Updates on July 22. Sponsored Updates appear in a native format as a natural part of a target audience’s feed and can be used to promote thought leadership content, to generate leads, or even as a PR tool. 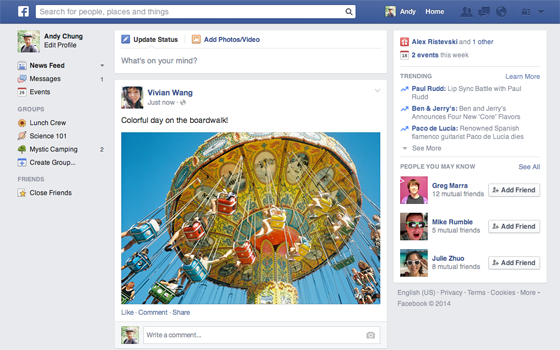 On March 7, Facebook revealed a News Feed redesign that featured larger visuals, a mobile-first user interface and more opportunities to filter by specific types of content.

Facebook’s 20% Rule required text to appear on less than 20% of Cover Photos (and Promoted Posts), another attempt by Facebook at ensuring a quality visual experience for its users.

Not all features made it to December though. Facebook quickly backed away from automatically placing image captions and descriptions on top of photo page posts, preferring to keep text and image separate in the News Feed.

Facebook continued its redesign the following month with a new layout for Pages. The new Pages layout changes included a simplified look, easier ways to connect with businesses and streamlined page management.

With a greater push for mobile and more real-time content, Facebook simplified its contest promotion guidelines. Its new set of rules allowed pages to run contests in the news feed without a third party application, ask people to submit answers in exchange for chances to win a prize, and to use Likes as a method of entrance into a contest.

In 2012, Sheryl Sandberg predicted a future of more ads in Facebook’s mobile News feed… and she was right. Facebook’s mobile-first emphasis in 2013 resulted in more users embracing the social network on the go. 54% more users logged into Facebook on a daily basis in Q3 2013 as did in Q3 2012, an increase from 329 million to 507 million in one year.

Confidence In The Newsfeed Wained

While mobile users swarmed to Facebook in droves, not all marketers were thrilled with the social network’s changes. A set of late 2013 News Feed algorithm changes resulted in an extreme drop in organic reach for many Pages, as much as 44 percent in many cases. The algorithm changes were intended to place more relevant news stories into the News Feed, especially from sites that Facebook deemed as “high quality” sources.

Facebook did little to quell marketer concerns when it put out an announcement recommending that they could make up the difference in reach with advertising.

To further emphasize this, Facebook rolled out a series of ad changes in 2013, eliminating at least 13 ad units and increasing ad targeting opportunities.

Marketers told Facebook that its ad products were too complicated and redundant, which led to Sponsored Stories shifting from a stand-alone product to integration into most ads, which would “automatically add social context to boost performance.”

Facebook added Partner Categories to connect together online and offline user data. Partner categories use data from select third parties, including Acxiom, Datalogix, and Epsilon, to target ads to more categories of people.

For example, a local car dealership could show ads to people likely in the market for a new car who live near their dealership. Facebook also simplified Interest Targeting by combining Precise Interest and Broad Categories into a single step, making it easier to select the audience most relevant to what’s being advertised.

Advertisers looking to target customers who considered a purchase on their site but didn’t complete the transaction gained a new Facebook alternative to FBX in October. The new retargeting tool, “website and mobile app custom audiences,” works when marketers affix tracking software to their websites and create corresponding custom audiences based on user activity data.

Graph Search provided users the opportunity to easily search and examine trillions of relationships that live within Facebook’s ecosystem. Facebook also added support for searchable hashtags in June, thereby acting as a new connective thread for users to share their thoughts to a larger audience on social networks.

Graph Search has a lot of potential and is just the beginning of opening up the massive amount of social connection data that Facebook controls, and charges for. We can’t wait for LinkedIn to do the same.

How to Keep Your Conversion Optimization Process Organized

Why Surprise and Delight is an Ineffective Word of Mouth Strategy