With more and more advertisers jumping into “real-time marketing,” there is significantly more competition by brands for a captive national audience.

But in order to take advantage of that captive audience, brands need to move beyond just the social networks feed.

Case in point: throughout this month, auto makers have been competing for Jimmy Fallon’s business after the Tonight Show host mentioned he wanted to buy a truck on his show.

Ford responded first on Twitter with General Motors, Dodge and Nissan all following suit in a brief battle to court Jimmy with tweets and photos that tied into the show.

Dodge even showed up with a Ram parked outside the studios!

We’re waiting just outside of 30 Rock. Let’s take a ride @JimmyFallon, bring the little one too. #GUTSGLORYFallon pic.twitter.com/be4vmn4IoF

Almost instantly, behind the scenes, the team at Ford was working on an integration with Fallon’s team once he announced a winner.

At the end of last week Fallon announced the Ford F-150 King edition as his truck of choice and debuted #Fingersona4x4 – a livestreaming contest pitting a number of local Ford dealers against each other for the eventual business of Fallon.

The premise was simple: Each Ford Sales Consultant was given a personalized hashtag and set up next to a Ford F-150 King Ranch. Take your hand off the Ford and you lose, last one standing wins.

The competition quickly gained traction on Twitter across the country throughout this week’s episodes of the Tonight Show, a quick search on Twitter will find no shortage of tweets and conversations about Ford as local markets were pulling for their area’s consultant.

On Wednesday afternoon after the ten contestants held their hands on a truck for more than 38 hours straight Pete Porzio aka #FrankfortPete from Frankfort, IL’s Currie Motors was announced as the winner.

How they pulled it off

Right-time marketers must have teams that are multi-faceted in their skillsets to be able to identify opportunities like this one with Fallon.

We caught up with Scott Monty (@ScottMonty), Global Digital & Multimedia Communications Manager at Ford Motor Company, and he filled us in how the Fallon integration went from a single tweet to parking a truck on the deck of the USS Intrepid in a matter of days.

1. How organic was this really? Is looks a little too good not to be planned.

Scott Monty:
On March 5th, Jimmy sat down at his desk and stated, “I want to buy a truck.” He asked his audience what he should buy and what they had. One guy said he had an F-150, and when Jimmy asked if it was big, the customer said, “Big enough.”

That evening during the show, the @FordTrucks handle tweeted:

@jimmyfallon We think you should get a 2015 F-150 King Ranch edition http://t.co/OGTUUtGgPC

Ford had the first-mover advantage, as other automakers didn’t reply until 10 a.m. the next morning.

2. How did the #Fingersona4x4 promotion come about as an on-air integration? What was the creative process like between Ford and Fallon?

Scott Monty:
“Jimmy and the Tonight Show team were contacted by multiple manufacturers about this opportunity but ultimately Jimmy chose to personally buy a 2015 Ford F-150 King Ranch.

3. Can you talk a little more about the decision to use your sales consultants, effectively activating your employees from corporate down to the local dealerships? And how much were the local teams involved in this effort?

Scott Monty:
As you know, The Tonight Show with Jimmy Fallon is nationally recognized and Jimmy himself has over 12 million followers on Twitter. For that reason, it’s extremely easy to get people interested and involved in being active to support it.

We looked at some of our most successful sales consultants and selected them for the opportunity to represent Ford on a national level. You can bet that their local communities are extremely motivated to support them.

But overall, this is a One Ford effort – people from all areas of the company coming together to promote Jimmy’s decision to buy a 2015 F-150 King Ranch. 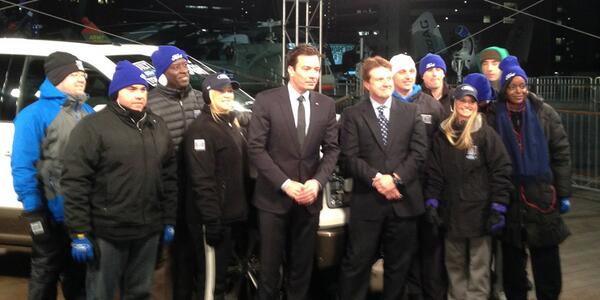 4. How do you think brands can translate  moments like this into full-blown campaigns?


Scott Monty:
Personally, I think it has to do with having one finger on the pulse of current events – to know what’s going on – and another on the sensibilities of the audiences they’re trying to engage with.

In our case, it made perfect sense to tweet Jimmy a recommendation for a truck, because Jimmy relies on Twitter nearly every day on his show. It was completely aligned with him as a platform, and the ability to do something creative with him around the F-150 was perfect for both parties.