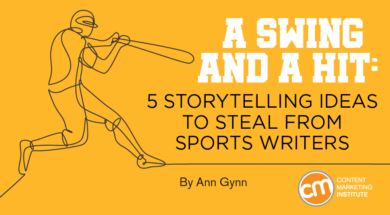 With March Madness underway, millions who don’t usually follow college basketball are paying attention to the sport. Most return for the annual event because they join office pools or other contests where they complete their brackets and hope their choices make it through each round of the competition.

But this month, I’m inspired to look closer at sports writing and broadcasting – and how content marketers can learn a writing lesson (or five) from them.

I’m a proud alum of Ohio University, but I don’t keep up with their sports teams’ records and couldn’t name a player of any sport. Earlier this month, I happened to see their men’s basketball conference championship on ESPN2. The game was a blowout.

In case you’re not a sports fan, a blowout means one team has a huge lead over the other and will probably win. Since there’s little suspense about the game’s outcome, on-air broadcasters have to tell compelling stories to keep the audience’s attention.

That’s how I learned about Jason Preston. Here’s the brief, less-articulate version of the story a broadcaster told during the game: At the age of 15, Jason lost his mom – his only parent and the person who had shared her love of basketball with him – to lung cancer. During his time on the high school basketball team, Jason averaged only two points per game. After graduation, Jason played in an amateur league, where he improved his game and caught the attention of a sports prep academy coach. At the academy, Jason’s game got even better. Eventually, he created his own highlight reel and posted the video to Twitter. That led to a scholarship offer from Ohio University. And in 2021, as a sophomore, he helped that team earn the conference title and its first ticket to the NCAA tournament in nine years. (That’s the Reader’s Digest version. Read the full story in this NBC News article.)

If you’ve ever watched the Olympics, you’re familiar with this concept. People don’t tune in only to learn who won gold, silver, and bronze. Stories of inspiration, hope, and drama about athletes capture viewers’ interest. Knowing the athletes’ stories makes the competition more interesting and the stories of wins and losses more emotional.

That’s an important reminder for all content creators. Stories about people, not just processes or results, are the most memorable – and they move readers and viewers to share the stories with others.

HANDPICKED RELATED CONTENT: The Art and Science of Emotional Engagement

Sports writers and broadcasters face the same formula day in and day out. Teams (or individual athletes) compete against each other. They score points. And after a predetermined time, the one with more points wins (except in golf).

That repetition could get boring. So sports writers and broadcasters must breathe life into every competition. They coin clever turns of phrase, change the energy of their voice, find fresh angles, and describe unexpected maneuvers in ways that make viewers feel like they’re right there experiencing the action.

The Washington Post writer Des Bieler used an unexpected happening as the focus for a recent article on a spring training game between the St. Louis Cardinals and New York Mets. Here’s the lead:

Jordan Hicks waited almost two years for another chance to pitch to an opposing batter. It might have felt like almost as long a period of time before that plate appearance ended.

Brought on in the fifth inning of a spring training game Sunday between his St. Louis Cardinals and the New York Mets, Hicks threw an astonishing 22 pitches to the first and only hitter he faced, Luis Guillorme. The Mets infielder eventually drew a well-earned walk, ending the day for Hicks, who was only supposed to work one inning but got the equivalent in one plate appearance that lasted more than 15 minutes.

Now, a walk in baseball rarely gets a mention in any game coverage – walks happen often and only lead to a score if something else happens in the game. But someone saw the pitch count to this single batter rising and knew it was unusual. Someone looked up the record book. Someone kept watching. And Des ended up with a story much better than: “The New York Mets beat the St. Louis Cardinals 7 to 5 in a spring training game.”

Content creators often face challenges similar to sports reporters. You cover the same topics in the same formats regularly. But that doesn’t mean your content has to be formulaic or repetitive. Do your research so you can observe the unexpected, brainstorm fresh twists, and amp up your words.

TIP: Want more inspiration? Listen to play-by-play sports announcers to see how they use different terms and phrases to describe actions repeated throughout the event.

Sports #writing tip for #Content Marketers: You cover the same topics again and again – but you don’t have to describe them the same way every time, says @AnnGynn via @CMIContent. Click To Tweet

HANDPICKED RELATED CONTENT: How to Do Brand Storytelling in 3 Successful Ways

Some of my favorite writers are sports writers and columnists. It’s the reason I once subscribed to Sports Illustrated and eagerly consume The Athletic, the relatively new sports journalism site and app (where former 2018 Content Marketer of the Year Finalist Evan Parker is now general manager/vice president).

I love how their writers use the power of the English language. Take this lead from a recent story on The Athletic:

The Westmount Recreation Centre squats at the foot of Montreal’s grandest neighbourhood, and on a sunny late-August afternoon an NHL veteran is at ice level, wrestling with a decision.

Derick Brassard has played on hockey’s biggest stage for 12 years, basically his entire adult life, but in his offseason workouts over the past few weeks he’s had an unsettling realization.

What if, after all this time, his skates were set up wrong?

As I said, I’m not a hockey fan. So why would I read Sean Gordon’s article? The beauty of his first paragraph drew me in with phrases like “squats at the foot of Montreal’s grandest neighborhood” and “is at ice level, wrestling with a decision.”

I can see where the story’s star is. I can picture him in contemplation. And with the next two paragraphs, I wonder why this person would suddenly realize his skates were set up wrong. So I keep reading.

This Athletic piece on the WNBA finals by Chantel Jennings is another great example.

An exclamation mark, not an asterisk.

That was the way WNBA players described what this 2020 championship title would be, how this season would stand in history.

Forget that it was a shortened season, forget that it was all played within a square-mile high school campus in Western Florida. When the green and yellow confetti had fallen, the nets had been cut down and the Seattle Storm were the team left standing in the empty soundstage that had been converted into an arena, even without fans there was a feeling of exclamation.

The Storm had swept both the Lynx, their semifinal opponent, and the Aces, their opponent in the Finals.

The powerful first statement sets the stage for the excitement. Then, she eloquently captures 2020’s impact on the women’s basketball season.

Content marketing writers can take inspiration from the vibrant imagery sports storytellers use. That doesn’t mean adding more adjectives and adverbs to our sentences. It means choosing each word for the power it holds to tell or further the story.

HANDPICKED RELATED CONTENT: 4 Real-Life Ledes: Why They Work (and What Could Be Better)

Write for your audience, not every audience

During the pandemic, I’ve been binge-watching classic sitcoms, including The Bob Newhart Show (the 1970s version where he played a psychologist in Chicago.)

In one episode, Bob’s wife Emily is reading the sports section of the newspaper and doesn’t understand what all the phrases mean. To Bob, the sports articles make perfect sense.

Sports writers and broadcasters create content for an audience that knows the sport. They aren’t attempting to explain the game, they’re explaining what happened during the game.

Here’s an excerpt from a recent Associated Press article about a National Hockey League game between the St. Louis Blues and the Las Vegas Golden Knights:

Sammy Blais ended (Marc-Andre) Fleury’s bid for his 66th career shutout when he scored his third goal of the season on a feed from Vladimir Tarasenko. Tarasenko has a goal and three assists in four games since returning from shoulder surgery …

St. Louis failed to convert on any of its four power plays, including a 53-second two-man advantage midway through the third period. The Blues entered the game having scored with the man advantage in six straight contests.

The highlighted words are terms I’m not familiar with since I don’t follow hockey. I can guess an “assist” is credit for helping another player get the actual goal. But I don’t know  the terms “power plays” and “two-man advantage.”

The writer didn’t write the article for me. And that’s OK. I’m not the target audience for NHL game coverage.

#ContentMarketing tip from sports #writing: You don't need to explain the game every time. Write for the target audience, not all audiences, says @AnnGynn via @CMIContent. Click To Tweet

(Want to know how the NHL describes an “assist?” Read here. Want to know what a “power play” is? Check out the Wikipedia explanation. And a “man advantage?” Again, Wikipedia to the rescue with its ice hockey terminology page.)

HANDPICKED RELATED CONTENT: How to Get in Your Customers’ Heads for Invaluable Research

Many years ago, I played on my newspaper’s softball team. For me, it was a chance to play the game I enjoyed in my youth. We practiced a few times – hitting, catching, and throwing. But we never played a practice game.

At our first game, a co-worker stepped up to home plate,  swung the bat, and hit the ball into the outfield. While we cheered, she ran to the base. Third base. (Our enthusiastic cheering quickly changed to frantic shouts telling her to run the other way, which she did – before getting the official out.)

Oops … we should have added baserunning to our practices. But we didn’t know she’d never played the game.

The lesson for content creators: Don’t assume your audience knows everything you do. You don’t need to explain every term, acronym, or concept in every content asset (see earlier tip), but you can make it easier for the less knowledgeable in your audience to learn.

Create a go-to resource – a primer for your audience – that delves into your industry’s terms of art in detail. Host this primer on your website and link to each term when it’s used in your content.

Of course, you may not realize what your content consumers don’t know. Ask people new to or outside your industry or target audience to read some content and underline or highlight every word or phrase they don’t understand. Add those words and explanations to your primer.

I realize this last lesson doesn’t really come from sports writers (though there were a few on our team). But the story and takeaway were too good not to share.

What storytelling skills have you learned from sports writers? I’d love to hear your examples in the comments.